Ottawa, July 20, 2020 – The Coaching Association of Canada (CAC) is pleased to welcome five outstanding sport leaders to its Board of Directors. Newly elected members and their respective positions are as follows:

“We are excited to welcome Tom, Tracy, Jason, Doug, and Ryan to our Board,” said Paul Carson, Chair of the CAC’s Board of Directors. “The diversity of their experiences and perspectives, their demonstrated leadership and accomplishments in our sport system, and their passion for coaching will be instrumental in helping guide our organization in responding to the new demands and challenges of a rapidly changing sport landscape.”

Jason is currently the Head Coach of Track and Field and Cross Country at the University of Saskatchewan. He also serves as the President of the USports Track and Field Coaches Association, as the VP of Performance for Saskatchewan Athletics, and holds a position on the national coaching committee at Athletics Canada. A five-time conference coach of the year awards (AUS & CanWest) and a three-time national team coach, Jason is also a well-regarded international and national presenter on performance analysis. Over his career he has developed a coaching philosophy that is athlete-centered, coach-led, evidence-supported and strategically designed. Jason is regarded by his colleagues as an open leader respected for his ability to balance coach and athlete performance and development.

Tom is currently a Staff Sergeant Member of the Royal Canadian Mounted Police in British Columbia “E” Division Major Crime with 35 years of meritorious service. He brings to the CAC Board nearly four decades of sport experience as a coach, athlete, and advocate. Twice the recipient of the Petro-Canada Award for Excellence in Coaching, in addition to numerous other coaching accolades, Tom served as the Head Coach of Team Canada Athletics at the 2019 Special Olympics World Games in Abu Dhabi and as Special Olympics Head Coach for Team British Columbia Athletics. Tom has also held a variety of leadership roles in the provincial and local sport community and is a Board Director with the Valley Royals Track and Field Club in Abbotsford, BC. Tom is an active fundraiser and volunteer for Special Olympics BC and the Canadian Cancer Society. He views leadership in his community as a foundation for positive change.

Doug is the Sport 4 Life and Coaching NL project leader with Sport Newfoundland and Labrador, where he oversees, administers, and evaluates the delivery of the National Coaching Certification Program (NCCP) and Sport 4 Life initiatives. Doug gained significant leadership and administration experience as the former Technical Director and Head Coach at the Pearlgate Track and Field Club in Mount Pearl, NL, where he was responsible for planning and implementing club and facility programs and services, and for recruiting and managing staff. Doug is successful in building and motivating dynamic team outcomes and values a culture in which staff and volunteers feel comfortable voicing questions and concerns while developing new ideas that are essential to organizational growth

Tracy is the Manager of Recreation for the Community Government of Behchoko, Northwest Territories, where she is responsible for the organization and implementation of sport and recreation programming for children and youth of all abilities in her community. Tracy brings to the CAC the experienced gained over a 40-year career in sport as a volunteer, coach, official, and athlete. She has 25 years of experience coaching multiple sports and 30 years of experience in program design, management, and evaluation. Currently she is certified as an NCCP Competitive Development Speed Skating coach, has attended the National Coaching Institute in Calgary’s Advanced Coaching Development program and has held coaching positions both in western Canada and internationally with New Zealand Speed Skating. Tracy has published peer reviewed articles on fundamental movement, different physiological/psychological responses to training, and peer-to-peer learning in development athletes. She holds a PhD in Zoology from the University of Guelph.

Ryan is a Sport Consultant for the department of Communities, Culture & Heritage within the Government of Nova Scotia, where he leads files related to concussions, gender equity sport hosting, and Indigenous sports. Previously, he worked as the Mi’kmaw Sport Coordinator at Mi’kmaw Kina’matnewey, where he monitored the progress of bilateral agreements and initiatives related to sport, fitness, and physical activity in First Nations Communities. He boasts rich experience as a hockey coach and volunteer, acting as Head Coach of the Women’s Atlantic Team at the 2019 National Aboriginal Hockey Championships, and having served on Mission Staff for Team Nova Scotia at the Canada Winter Games and North American Indigenous Games, among others. A passionate advocate for Indigenous peoples and sport, Ryan believes strongly in the positive impact of effective coaching in his community.

The Coaching Association of Canada unites stakeholders and partners in its commitment to raising the skills and stature of coaches, and ultimately expanding their reach and influence. Through its programs, the CAC empowers coaches with knowledge and skills, promotes ethics, fosters positive attitudes, builds competence, and increases the credibility and recognition of coaches. 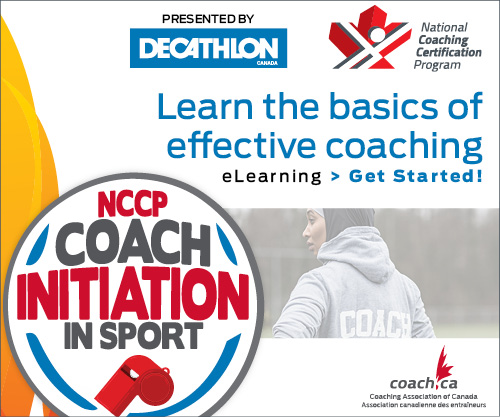